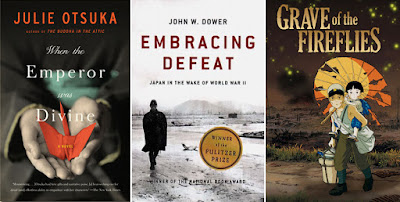 To mark the 70th anniversary of the end of WWII today, we've compiled a shortlist of books, articles, films and historical documents that help contextualize the relationship between the U.S. and Japan before, during and after the war. While by no means exhaustive, this selection illustrates the complexities and ramifications of the war, from the imperialist maneuverings that led to the Pacific War to what is now considered the cornerstone alliance in the region towards stability and prosperity by the U.S. Department of State. Additional topics covered include life in the Japanese internment camps, the American Occupation of Japan, the aftermath of the atomic bombings, and the Japanese Constitution and the U.S.-Japan Security Treaty. Those marked with an asterisk (*) are recommended by Japan Society's Education Program as resources for educators when teaching war-related topics, U.S.-Japan relations during and after WWII, and the atomic bombings.

Embracing Defeat: Japan in the Wake of World War II, John Dower
Awarded the 1999 Pulitzer Prize, this seminal history details Japan in the immediate aftermath of WWII and how the American occupation affected Japanese society from politics to the arts and popular culture. Ian Buruma, reviewing the book for the New York Review of Books, called it a "superb history.... Dower brilliantly captures the louche​, squalid, but extraordinary dynamic mood of the postwar years." Dower followed the book up with the equally profound collection of essays Ways of Forgetting, Ways of Remembering: Japan in the Modern World, which served as the basis for Japan Society's Stories from the War programming series this year. In an interview with NPR, Dower said, "as time passes, we do see things differently. We do ask different questions, and they're very important. And I think by not asking those questions, it affects our present-day response to current crises." Read an excerpt here.

Hiroshima*, John Hersey
In 1946, a year after the atomic bombs had been dropped on Japan, The New Yorker dedicated an entire issue to first-hand accounts from six Hiroshima survivors, written by Pulitzer Prize-winning author John Hersey. Considered a landmark in journalistic achievement, it was one of the first in-depth mainstream accounts of the aftermath of the bombing. The article was banned in Japan by occupation authorities until 1949.

Japan and Imperialism, 1853-1945*, James L. Huffman
Published by the Association for Asian Studies in 2010, Huffman's "lively narrative" looks at Japan’s responses to Western imperialism and colonialism, and its efforts towards imperial expansion.

When the Emperor was Divine, Julie Otsuka
This acclaimed novel of historical fiction follows the experience of a Japanese-American family sent to an internment camp during WWII. Widely considered a modern classic, the book is now on required reading lists in schools across the U.S. Read an excerpt of the chapter "Evacuation Order No. 19".

The Treaty of Mutual Cooperation and Security between the United States and Japan
First signed in 1952 and amended on January 1960, this treaty outlines the U.S.-Japan security alliance, which is considered "an anchor of the U.S. security role in Asia". Upon the 50th anniversary, George R. Packard penned "The United States-Japan Security Treaty at 50", examining how to update the treaty to better serve the best interests of both countries in modern times.

American Experience: Victory in the Pacific*, dir. Austin Hoyt, 1995
A PBS documentary examining the end of WWII from the perspectives of both the Japanese and the Americans.

Barefoot Gen, Keiji Nakazawa
This classic ten volume manga series illustrates the author's first-hand experiences during the atomic bombing of Hiroshima and its aftermath. Despite a call for a ban in recent years, the book has been used in classrooms to help teach WWII history.

Black Rain*, Masuji Ibuse
A tale of a young woman caught in the fallout after the atomic bombing of Hiroshima. lbuse based his highly acclaimed fictional story on real-life diaries and interviews with victims. According to The Japan Times, "the documentary style allows Ibuse to reveal Japanese customs and culture in an affirmation of normalcy in abnormal situation."

The Bomb, Howard Zinn
Historian Howard Zinn reflects on how a visit to a Hiroshima house of rest for bombing victims changed the way he viewed the end of WWII, having served as a bombardier in the European theater.

The Chrysanthemum and the Sword, Ruth Benedict
Originally an internal working paper distributed amongst the American armed forces, this controversial classic is considered by many required reading to understand how Americans viewed Japanese during WWII. For a deeper understanding of the time period, read C. Douglas Lummis's essay "Ruth Benedict's Obituary for Japanese Culture".

The Clash: U.S.-Japanese Relations Throughout History, Walter LaFeber
Winner of the Bankcroft Prize, LaFeber's book purports to tell the "entire story behind the disagreements, tensions, and skirmishes" between the U.S. and Japan since Japan opened to the West.

Come See the Paradise*, dir. Alan Parker, 1990
A drama of life before and during WWII and lives affected by the internment of Japanese-Americans.


Digital Collections of the National WWII Museum*
A search engine for digital resources on WWII.

Farewell to Manzanar*, Jeanne Houston and James D. Houston
The true story of a family's struggles in a Japanese internment camp.

Grave of the Fireflies*, dir. Takahata Isao, 1988
Studio Ghibli's deeply affecting, acclaimed animated film about a young boy and his little sister's struggle to survive in Japan during WWII.

Hibakusha Stories*
This nonprofit organization connects hibakusha, survivors of the atomic bombings, with high school, youth groups and the general public around the world. The site contains video testimonies from Setsuko Thurlow, Yasuaki Yamashita and many more.

“Japan’s Debate on Constitutional Reinterpretation: Paving the Way for Collective Self-Defense”, Hitoshi Tanaka
JCIE paper from February 2014 about developments in Japan’s national security policy, including establishment of a National Security Council based on the U.S. model, the announcement of the first National Security Strategy a month later, and re-interpretation of the constitution.

Japanese Internment Broadside*
Among Gilder Lehrman Institute of American History exhaustive resources for the improvement of history education (over 60,000 unique documents) are many primary sources from WWII including these images from the internment of Japanese. Registration required.

The Life of Isamu Noguchi: Journey without Borders, Masayo Duus
The first full-length biography of legendary American sculptor and designer Isamu Noguchi, who struggled with his Japanese-American heritage and famously volunteered himself for the internment camps. Offers great insight into the time period during and after WWII. A new biography Listening to Stone: The Art and Life of Isamu Noguchi, was released this year by Pultizer Prize-nominated author Hayden Herrera to wide acclaim.


“Miscalculations in Deterrent Policy: Japanese-U.S. Relations, 1938-1941”, Chihiro Hosoya
Looks at events leading up to WWII, and examines miscalculations by the American government as to how Japan would react to economic sanctions.

Nagasaki: Life After Nuclear War, Susan Southard
Published this year for the 70th anniversary of the atomic bombing, Southard spent more than a decade researching and interviewing survivors to tell the often neglected story of the second nuclear cataclysm of WWII.

No-No Boy, John Okada
A novel about the "no-no boys", Japanese-American youths who refused to swear loyalty to the United States and enlist in its army.

The Only Woman in the Room, Beate Gordon
Beate Sirota Gordon's memoir about the role she played in drafting Japan’s postwar constitution. Gordon, who passed away in 2013, was a former Japan Society program director.

Summer Flowers, Tamiki Hara
Written following atomic bombing of Hiroshima, survivor Tamiki Hara recounts the horrors of what he witnessed during the aftermath. Included in the anthology The Crazy Iris and Other Stories from the Atomic Aftermath, compiled by Kenzaburo Oe.

Tokyo Rose / An American Patriot: A Dual Biography, Frederick P. Close
A story about a Japanese-American woman trapped in Tokyo during World War II and forced to broadcast on Japanese radio. Read a précis of the book.

奇跡はつばさに乗って（きせきはつばさにのって, “A Miracle on Wings”）by Japan Society’s own Minamoto Kazuko, is definitely worth a mention. It’s about the quest of Sadako Sasaki, a young girl who was in Horoshima when it was bombed, to ward off the resulting leukemia by folding 1,000 paper cranes. (She died ten years after the bombing, aged 12.) Paper cranes have since become a symbol of peace and hope, and Ms. Minamoto draws parallels between the A-bomb and the 9/11 attacks in New York.

It’s only available in Japanese, but is written in clear language that can be understood by upper-level elementary school students. So it is also great reading practice for students of Japanese at an intermediate-level.

Let me also recommend John Dower's "War Without Mercy". It's a detailed examination of the racial and cultural biases on both sides of the conflict and how they affected the course of the war. In fact, I would recommend reading it before "Embracing Defeat". The conclusion I reached from the book (as well as many others) was that the we thought the Japanese couldn't fight and that they thought we wouldn't. We were both wrong.

I would add The Japanese Liver by Isabel Allende

I would add The Japanese Liver by Isabel Allende

Sorry about typo Lover not Liver

Nuclear War: Hiroshima, Nagasaki, and
A Workable Moral Strategy for
Achieving and Preserving World Peace by Raymond G. wilson
is also a worthwhile book on this topic.
It may be downloaded from this site:

is Wind Rises could be included to the list?
maybe it not much about Japan-US relationship, but its about the make of famous (or notorious) Mitsubishi A6M "Zero".

I have read 2 of the books there. Loved them. Had no idea there are more of the same mark.
compare Gatwick parking

The resources are great! We hope that the U.S - Japan relations strengthen in the coming years.
How to Read Japanese

Submit your website or blog now for appearing in Google and over 300 other search engines!

Accelerate Your Business! Advertise on the most popular PTC & TE websites with a single purchase. TrafficHeap.

If you need your ex-girlfriend or ex-boyfriend to come crawling back to you on their knees (no matter why you broke up) you need to watch this video
right away...

(VIDEO) Get your ex back with TEXT messages?

Lovely blog. Thanks for sharing with us.
clipping path service

HP is a known brand globally with several products, and HP Printer is among the best. HP Printer has many models with quality features. There is a possibility that you might face some technical error and to rectify them you have the best option of HP Printer Tech Support Number +1-870-345-4464 where the experienced technicians will assist you.
HP Printer Customer Care Number
HP Printer Customer service Number

Thanks for the info
adrobook


What a magnificent tricks!I really enjoyed it. Thanks a lot for sharing. Footwear photo editing services
Background Removal Service