Japan's Table For Two Fills Stomachs In Africa And The U.S.

Of the 7 billion people living on Earth, roughly 1 billion do not have adequate or reliable access to food and water. About the same amount of people are overweight, obese, or suffer from health issues related to overeating.

Table for Two, a Japanese nonprofit, aims to correct this imbalance. Instead of directly soliciting financial donations, Table for Two’s innovative model helps to design healthy meals to be served in cafeterias, restaurants and grocery and convenience stores. About 20 cents from the proceeds of the sale of these meals then goes directly to subsidizing nutritious meals for school-aged kids in Africa. Here’s a brief video of a launch event in a Japanese corporate cafeteria [video]

So, Table for Two’s aims are, well, twofold. First: to provide easier access to nutritious meals to children in Africa who may not normally be able to eat regularly. And second: to foster greater awareness of world hunger, and healthier eating habits in those who have easier access to regular meals. 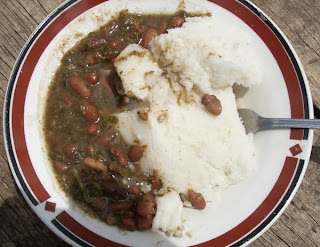 Posho & Beans (image courtesy of TFT)
With over 250 corporate cafeterias participating in Japan, meals are already being served up to the hungry in Uganda, Rwanda, Malawi and Ethiopia, with South Africa to follow later this year. Meals for the school children under Table for Two usually consist of Posho, a maize porridge, and beans or meat for protein.

Table for Two is also in the process of expanding its operations into the U.S. High-profile clients include the Kitano Hotel and Columbia University, which begins participating in fall 2010. A full list will soon appear on Table for Two’s website!

As an individual, you can contribute by dining at a cafeteria or restaurant that’s a member of Table for Two, or by shopping at a store that is affiliated with it. Until that list is available, stay connected by joining Table for Two on Facebook. Japan Society holds an evening event on Wednesday, July 21with a lecture by Table for Two International Chairman Masahisa Kogure and a sampling of Table for Two-sanctioned meals. Kogure discusses Table for Two’s mission, and his strategies for expanding into the U.S. The event is part of Japan Society’s U.S.-Japan Innovator’s Network.