Since the time when Japan opened up to the outside world, its people and culture have often been scrutinized through the lens of kawaii aesthetic, or the fondness for all things small and cute. Laying the background for kawaii that has dominated not only the cultural phenomena within Japan but also how Japan is viewed from the outside, David Elliot, curator of Bye Bye Kitty!!! Between Heaven and Hell in Contemporary Japanese Art, writes in the exhibition catalogue:


The paternalistic outsider’s view, equating lack of Western modernity with premodernity, feudalism, and by extension, a state of immaturity, was founded on the notion that Japan was essentially “different” from other countries, and Japanese “childishness” could easily be proven by a perceived taste for miniature versions of things or a preference for natural beauty and materials.


Since the early twentieth century, Japanese art has developed in conversation with Western modernism, but Western commentators have too easily dismissed Japan’s recent and contemporary art as a derivative reflection of its own image (some children are very good at copying) or embraced it as quaintly traditional, otaku, or kawaii – a stereotypical expression of childlike grace that the simply drawn, mouthless features of Hello Kitty epitomize in their bland inscrutability.

Hello Kitty, a character developed by Sanrio and marketed with huge success far and wide epitomizes the dominance of kawaii. A 2004 Japan Times editorial entitled "Time for Goodbye Kitty", highlighted, albeit with reservations, the reign of Hello Kitty in commercial as well as non-commercial spheres. Calling Hello Kitty “the expressionless icon celebrating its 30th anniversary [in 2004]” the editorial cited its appearances on a MasterCard debit card in the United States and as a UNICEF “special friend of the children” to raise funds for girls’ education programs.

Takashi Murakami, the curator of Little Boy: The Arts of Japan’s Exploding Subculture, an exhibition presented by Japan Society in collaboration with the Public Art Fund in 2005, argued that Japanese art forms showed a “retreat from the adult world into an infantile, ‘superflat’ universe” owing to “Japan’s political emasculation” following World War II. Bye, Bye, Kitty!!! is an attempt to present the work of artists who have, in Elliott's words, “produced work that indicates a more complicated, adult view of life, melding traditional viewpoints with perception of present and future in radical and sometimes unsettling combinations”. The artists featured in the exhibition were born between mid-60s and early 80s (with the exception of one) and have been witness to rapid, and at times, drastic and overpowering transformations in multiple facets of the Japanese society.


This hybridity, one of the essences of Japanese pictorial creativity, has created a fertile seedbed in which the struggle between extremes of heaven and hell, fantasy and nightmare, ideal and real take place. There is no room for Kitty’s blankness here. But the boundaries between the extremes are often unclear. In a fiercely critical, socially rigid, and historically loaded environment, where irony is used as a weapon, one element may be unveiled to reveal its opposite.

Bye, Bye, Kitty!!! presents the work of 16 artists, half of them women. Among over 40 objects, three new works were unveiled including Kohei Nawa’s taxidermized deer covered with a skin of plastic beads to form an irregular, globular skin that confounds expectations of sight and touch; Tomoko Shioyasu’s large-scale installation, employing a version of the decorous Japanese art of stencil cutting to snip, slit, cut and slice a ten-foot sheet of paper into a membrane-like form that animates surrounding space with projected light; and Chiharu Shiota’s installation Dialogue with Absence, recently unveiled in Paris, which combines a painted wedding dress with pumps, tubing, and red-dyed water to create an umbilical network of linked veins that suggests a dreamlike, unconscious state of anxiety.

While the exhibit closes this Sunday, it will live on online, in apps (for both iPhone and Android), and in the catalogue published by Yale University Press as part of their Japan Society Series.

Earthquake Survivors And Lawson: More Than A Marriage Of Convenience


When Takeshi Niinami, CEO of Lawson convenience stores, first agreed to talk at Japan Society he expected to speak about Lawson’s expansion overseas. The company is opening stores in China, India, Indonesia and perhaps Vietnam. That changed on 3/11.

Those earth-shattering events brought new meaning to the important role convenience stores play in Japan's economy. To the surprise of many, when relief first came to some of the devastated areas, it was with a Lawson’s delivery truck, not a self-defense forces vehicle.

Stepping in after the tsunami where the government failed, Lawson's found itself in a highly unusual role of feeding and supplying hundreds of thousands of affected Japanese. “The public sector was of no help at all in the first ten days,” the CEO of Japan’s second largest convenience store chain told an audience at Japan Society recently. “We supplied aid more smoothly and systematically.”

Lawson took immediate action despite facing major disruption to its own business. While 20 Lawson Stores, many factories and distribution centers in north eastern Japan were destroyed or damaged by the earthquake and tsunami, the company’s supply chain in other parts of Japan remained in tact. Lawson's decentralized structure made it nimble enough to allow the company to move supplies quickly to the affected area.

Niinami's intense focus on the disaster required him to make unorthodox decisions with a speed unusual in Japan. “I took the executive decision to send supplies from Tokyo to Tohoku; this action brought a shortage of inventory to Tokyo causing complaints from customers there. I still believe that decision was correct though we lost some sales in the Tokyo area.”

And while Niinami was making key and quick decisions in Tokyo, he wasn’t trying to run the show from the capital. From the first day, he delegated authority to the regional head office in Tohoku where the general manager had more first hand knowledge of what was needed.

The devolution of authority led to some surprise requests including 20 motorbikes. “The Tohoku general manager needed the motorbikes because the roads were destroyed and there were no express ways,” said Niinami. Motorbikes were the most efficient way to get around and helped the company gather information on the ground. “I think the information we got was more correct than the information the public sector was collecting.”

Lawson was able to do this because the company has a well-established management culture where local managers exercise a great deal of autonomy. After the earthquake this proved invaluable. “In irregular times they had to make decisions,” Niinami said. “ They did a good job.”

In the first days of the crisis, a priority was to restore fuel supplies to the affected area. According to Niinami, most fuel supplies were being controlled by the government, which commandeered some commercial fuel tankers. Resupply was slow.

Niinami urged Lawson franchisees to not wait, but to drive their own fuel tanks to the area with or without government approval. Business partners also lent vehicles and shared their limited stocks of fuel. “Do not talk to the government,” Niinami said they told him. “So we sneaked in to some hidden places anyway.”

When Niinami heard that some truck drivers supplying Lawson stores were reluctant to go to areas with high levels of radiation, he took matters into his own hands and contacted some of them directly. “I will go with you, I told them,” he said. “Then one of the drivers said, “Okay I will go, I understood your guts, we don’t need you to come.”

Lawson’s rapid response to the disaster is proving to be much more than a marriage of convenience. Survivors were grateful that Lawson was quick to arrive on the scene, as other aid was slow to materialize.

The halo effect of its response is having surprising results in Japan and, Niinami hopes, soon overseas. The company has seen changes in consumer behavior following 3/11, some of which may influence the kind of stores it runs in the future.

After the quake, more people are shopping at local stores because they have no gas to drive to larger supermarkets. Housewives and senior citizens, who are not typical convenience store customers, are now seen much more often. As a result, Lawson is offering more fresh produce in small portions to meet their needs. Niinami hopes these groups will now become regular customers.

Overseas, Niinami feels that other countries will not only benefit from stores themselves but also from learning from Lawson’s record as a good corporate citizen as demonstrated by its response to 3/11.

Niimani's bold actions come as no surprise to those who know him. The Keio University and Harvard Business School graduate has earned a reputation for being a straight talking man of action, firing people when he arrived as CEO at Lawson and changing vendors.

Niinami has been President and chief executive officer of Lawson since 2002, after a career that started at Mitsubishi Corporation’s sweetener products division. Under his leadership, Lawson has increased operating profits for eight straight years. He is also vice chairman of Keizai Doyukai (Japan Association of Corporate Executives).

Reflecting on his recent experience, he understood the importance of not taking for granted what seems so normal and routine - operating a 'conveeni'. “We transported essential things, prepared foods, baked goods, water and blankets from as far way as Western Japan. I am proud we could provide some comfort and relief to the survivors.”

Hindell was BBC Tokyo bureau chief and Daily Telegraph Tokyo correspondent and is now based in New York. Read her article about the Japan Society panel Why Japan May Surprise the World: Rebirth after the Tohoku Quake.
Posted by Japan Society at 11:57 AM 1 comment:

With magnifying glass in hand, I was scouring the mind boggling detail of Manabu Ikeda's History of Rise and Fall (which Japan Society gallery director Joe Earle discusses in detail in this video), when I nipped a glimpse of a Cheshire-ish cat peeking slyly from some overgrown castle curtain. 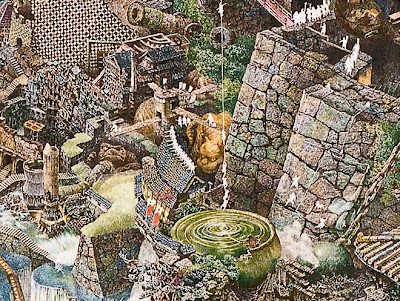 Ikeda is one of the 16 artists featured in the exhibit Bye Bye Kitty!!!, which closes Sunday June 12, but not the only one who injected some feline felicity into their art. The show is littered with them. 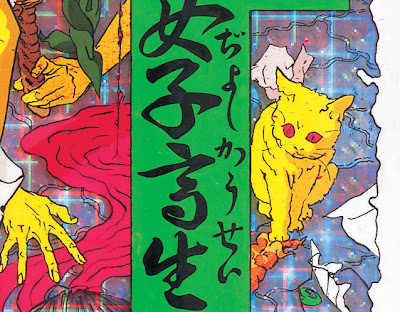 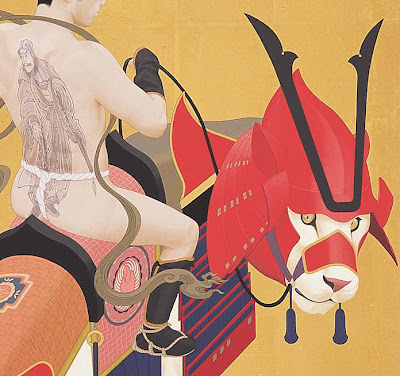 In the Bye Bye Kitty!!! catalogue, curator David Elliott comments on the "feral expression of fighting spirit" of Hisahi Tenmyouya's Defeat at a Single Blow, Robust and Magnificent Feature. But this dressed-for-success white tiger is giving a Cringer-worthy, over-the-shoulder smeyes that would give Tyra a runway walk for her money. 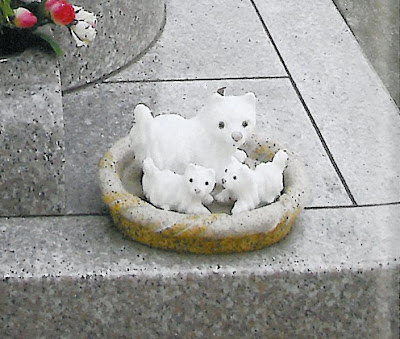 Finally, a basket of bob-tailed beauties preen at the foot of a pet tomb in Yoshitomo Nara's iconic untitled photo.

And while there are plenty more animals in the exhibit (some astoundingly crafted, others dangerous or dripping blood), "the show is less about Hello Kitty and the cult of supercuteness than about reasserting the relevance of an anxiety that has always been present in Japanese art" and so much more.

That said, if there are any dog lovers who have made it this far: 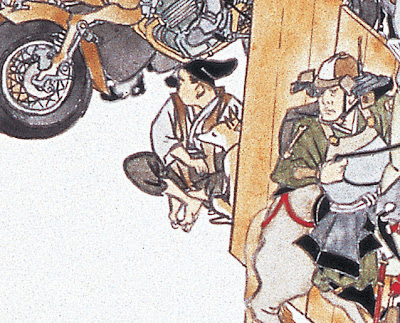