The sound of dried plants and drier voices greets us, nothing but wind and the slow jerky movements of creatures that where once . Watching the scene unfold, I cannot help to think of the first section of TS Eliot’s "The Hollowed Men": "We are the hollow men ... Our dried voices, when / We whisper together / Are quiet and meaningless / As the wind in dry grass / Or rats’ feet over broken glass".

Kon Ichikawa's Fire on the Plains, part of the ongoing Shadows of the Rising Sun film series, takes place during the last throws of the Japanese Imperial Army's hold on the unforgiving landscape of the Philippine island of Leyte in February 1945. We follow Private Tamura, a sunken-eyed, tubercular straggler; his army of walking skeletons with tattered clothes barely fitting their wasting frames; and other unfortunate beings Tarumua meets while traveling.

There is nothing triumphant or sentimentality patriotic in their situation--only the silent battlefield where triumphs and defeats mean equally nothing. The slow procession of the walking dead mirrors their agonizing craving for the nectar of life, but they merely suffer the eternal starvation brought on by their own barbaric, hollow and feeble attempts at glory. Their voices and gestures are as nonsensical as the wind through the dead grass. They are stuffed with hollow shadows of their former self. Again, they are Eliot's  hollow men on the hollow plains:


Shape without form, shade without colour,
Paralysed force, gesture without motion;
Those who have crossed
With direct eyes, to death’s other Kingdom
Remember us-if at all-not as lost
Violent souls, but only
As the hollow men
The stuffed men

Shadows of the Rising Sun continues tonight with Caterpillar, and Devils on the Doorstep and
Merry Christmas, Mr. Lawrence on Sunday, December. Tickets are $12 for general admission and $9 for Japan Society memebers, students & seniors.
Posted by Japan Society at 4:05 PM 3 comments: 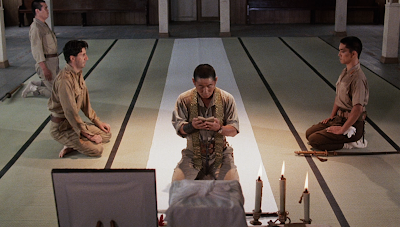 There is a scroll hanging in Japan Society’s Gallery for The Sound of One Hand called Nin. It is a simple calligraphic painting showcasing Hakuin's quick, fluid kanji stokes. In the middle is the distinct yet abstract impression of a person sitting in contemplation. The wall text simply gives the name of the scroll, its date of completion, and the translation: “Become the Master of your own Heart, and do not let it master you.”

This scroll has had profound meaning for and impact on me and the events around me, and I hasten to add that it goes perfectly with Japan Society's ongoing film series Zen & Its Opposite: Essential (&Turbulent) Japanese Art House, which explores the frailty of the human condition and the monstrosity that can manifest within our own hearts. The image also sings true for the latest film series Shadows of the Rising Sun: Cinema and Empire opening today through Sunday at Japan Society.

'Shadows' encompasses the full manifestation of a unmastered heart. Set in the particularly heinous Pacific campaign of World War II and told by keen eyes of filmmakers from Japan and China, the four films collide with Japan’s ambition for Empire and the harrowing descent. The films are not pretty, there is no honor, and no glory but madness. They show the truth of war, a particularly prickly subject to talk about and properly envision on film.

The four featured films are Kon Ichikawa’s Fire on the Plains (1959), Nagisa Oshima’s Merry Christmas Mr. Lawrence (1983),  Jiang Wen’s Devils on the Doorstep (2000), and the New York premiere of  Koji Wakamatsu’s Caterpillar (2010). Each film demonstrates the consequences of untamed ideals loose in an unforgiving world.  Some use dark humor, others use the bare and broken flesh as their medium, and others use the Greek tragedy formula to express when humanity falls into a shadow realm. Issues are dealt with utmost honesty, care and courtesy to all parties in these stories.

A resounding collection of anti-war war films, I'm reminded of the song "Our Solemn Hour" from the band Within Temptation and leave with the words:


Are they themselves to blame, the misery, the pain?
Didn't we let go, allowed it, let it grow?
If we can't restrain the beast which dwells inside
it will find it's way somehow, somewhere in time
Will we remember all of the suffering
Cause if we fail it will be in vain


Everyone knows how to get to Carnegie Hall (practice!), but who knew once you got there it would be a trip around the world!

A true New York institution, Carnegie Hall is what people think of when they dream of the world's finest Western classical music and its best performers. Carnegie Hall has also taken on the role of cultural ambassador, presenting stimulating series of world music. Last year they gave us the inspired Ancient Path, Modern Voices Chinese series, and this year they've outdone themselves with a staggering feast of Japanese culture.

Sprawling from December through April, JapanNYC was spirited by the legendary conductor Seiji Ozawa, who conducts two main event concerts with Japanese ensembles he has established. On December 14, he officially launches the festival with the Saito Kinen Orchestra. The program features a U.S. premiere co-commissioned by Carnegie Hall from composer Gondai Atsuhiko, Mitsuko Uchida  performing Beethoven's Piano Concerto No. 3, and what is sure to be a luscious performance of Brahm's first (there will be an encore performances of this program on December 15 and 18). Maestro Ozawa delivers another cornerstone concert in the second half of the festival March-April with a rare overseas appearances by the Seiji Ozawa Ongaku-juku.

Honored to be part of the festival, Japan Society's contributions include the classic Zen painting exhibit The Sound of One Hand (through January 9), the contemporary Japanese visual art show Bye Bye Kitty!!!  (opens March 18), and rare performances of ancient noh and kyogen theater (March 24-26.

While the full schedule is wonderfully overwhelming, December highlights, in addition to those mentioned above, include:

Winds and Strings of Change: Glories of the Japanese Traditional Music Heritage – Another tribute to Toru Takemitsu featuring the use of traditional Japanese instruments such as the Biwa, the Shakuhachi and the Koto presented at the Miller Theater. December 16.

A Tribute to Toru Takemitsu – Held at Zankel Hall, this performance will feature some improvisations on Takemitsu’s film scores. December 17.

On Becoming an Artist: Isamu Noguchi and his Contemporaries, 1922–1960 – The Noguchi Museum  highlights the relationship between famed Japanese landscape artist Isamu Noguchi to other artists during his time period. Through April 24.


Up and down--one chair pulled and the music continues. The players are Japan and South Korea, playing for decades in an international arena with their neighbor who has had an amazing growth spurt, China, and their cantankerous cousin North Korea. The music is the never ending (and often dissonant) song of diplomacy.

If we chronicle Japan and Korea’s quandary from 1990s to the present, it has been a continuing game of musical chairs. 720 miles apart, Seoul and Tokyo have faced economic strife and regional security detriments. Although many of the crises were similar, the two countries chose different paths with different geopolitical and domestic consequences.

South Korea, historical and regionally, has always been at the mercies of their neighbors and the international community. Currently they are rekindling their relationship with the U.S. and cooling to China since the sinking of the South Korean Cheonan. They faced many of the same economic, political and demographic problems Japan now faces. They made strong and bold reforms, created a robust economy, strengthened a vigorous and interactive democracy—all to enhance their geopolitical weight so they are no longer at the mercies of the world. Yet despite these accomplishments, they remain at an impasse with North Korea, where things have heated up of late.

Japan’s game change happened in 2009, when the Democratic Party of Japan defeated the more conservative Liberal Democratic Party, ending the latter's near unbroken rule since World War II. This was celebrated as a major step in Japan’s democratic system, but has so far created risks in every level of Japanese life: political, bureaucratic, economic and public. The situation now threatens the efforts of Japanese leaders and their allies to promote economic recovery and ensure stability in the region.

On December 8, Japan Society welcomes Harvard University Kennedy School of Government’s William Overholt to lead the hard-hitting discussion Japan & Korea: Domestic Reform & Geopolitical Shifts. Overholt is a one-time investment banker who has become a prominent Asian policy expert over the last few decades, planning studies at one time for the U.S. Department of Defense, Department of State, National Security Council, and Council on International Economic Policy, as well as penning six books (most recently Asia, America and the Transformation of Geopolitics).

In the discussion, Overholt poses the question: can Japan revive without crisis amidst unstable internal power structures and with such alarming international security issues unfolding in East Asia? He also addresses Japan's importance for Asia and South Korea’s management of a deteriorating North Korea.

The lively and timely discussion is presided by Robert Fallon, a professor at Columbia Business School, who also serves on the boards of Japan Society and Korea Society. Chairs will be provided, and the music has already begun to play.