Japan Society's building was selected as one of 40 New York City landmarks competing for restoration grants from American Express and the National Trust for Historic Preservation. With voting ending today, we offer a virtual tour of the building.

In 1969, when then Japan Society President John D. Rockefeller 3rd and Japanese Foreign Minister Kiichi Aichi broke ground for the construction of Japan Society's building, did they have any concept of what an enduring and important addition it was to New York City's cultural landscape?

Since the building--then called "Japan House"--opened to the public on September 13, 1971, it has been a hub connecting the people and issues between the U.S., Japan and the world, as well as a singular architectural gem embodying the Society's founding ideals.

According to the book Japan Society: Celebrating a Century, 1907-2007, “the chief appeal of the building lay in its distinctively Japanese feeling, but this effect, remarkably, had been accomplished almost entirely with American materials.” In a recent visit, Urban Gardens echoed this fact, calling the building:


a flat black modern reinforced concrete "bento box" filled with a delicious blend of creativity, culture and education–all existing above and below a serene interior Japanese style garden space… Yoshimura’s design has been described as a modern rendition of an 18th century elegant Kyoto inn. Known for infusing traditional Japanese elements into his modern works, the architect blended a Japanese sensibility with contemporary local materials.

The slanted fence at the base of the building is a modernist play on komayose (aka komadome or inufusegi)—an Edo period urban housing design element to keep horses and dogs away from the home and to enhance the privacy of the living room area, typically at the front of the house. The bottom of Japan Society's komayose extends one meter from the building—the traditional distance that a komayose stood away from a home. By the 18th century, komayose were widely used and were most often associated with posh machiya, structures which combined an artisan’s or merchant’s residence with their shop, encompassing manufacturing, office and retail space in one location.


Upon entering Japan Society’s building the cool, gunmetal slate tiles from the exterior carry through the interior, and cover the lobby walls to the cement ceiling. The wooden slats in the ceiling were initially made from hinoki, or Japanese cypress, so when lights heated up the slats, the cypress aroma would fill the building. The cypress has since been coated with flame retardant, which also masks the scent of the wood.

The slate and cement in the lobby is the perfect sound conductor for the indoor waterfall, allowing a gentle white noise rush to echo throughout the building. The waterfall paired with our indoor bamboo garden is such a unique element that it is frequently featured on television and in films most recently for episodes of Gossip Girl and White Collar.

The waterfall was not an original design element in Yoshimura’s drawings. From 1971 until a major renovation that lasted from 1995 to 1997, the area where the waterfall is now was an outdoor sculpture garden.


The renovation also added some other functional spaces to Japan Society—a fifth floor for additional office space, and the second floor of the building was converted into more usable Gallery space. In the original building configuration, only the South Gallery was intended for Gallery use. The North Gallery (the part of the Gallery directly in front of you when you climb the stairs) was originally used as meeting spaces that were available for public rentals. Those rooms were situated with views down onto the pond in the lobby. When Japan House first opened to the public, the lack of contrast between the slate and the stillness of the water confused some patrons, causing them to stumble into the pond because they thought it was a solid surface. There is now a low railing to protect people.

Other, more subtle touches of Japanese décor and design can be seen throughout the building, from the the large river rocks by the entryway to the shoji window and wall treatments in the lobby and on the second floor.

One wonderfully restful feature in the lobby is an original conoid bench by famed woodworker George Nakashima. The arresting work of art is available for anyone wishing to sit and absorb the beauty of Japanese art, architecture and design. 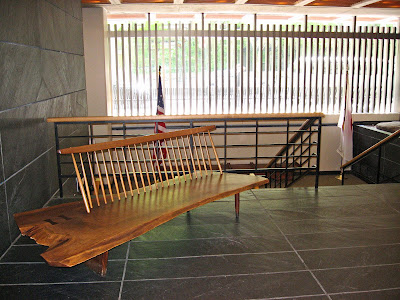 
Pleasure seekers, late night revelry, and a glut of cosmopolitan glamour characterize Japan Society’s current exhibition, Deco Japan: Shaping Art and Culture, 1920-1945, so what better way to celebrate licentiousness than to set up our very own speakeasy on a Saturday night?

On May 5th, from 7:00 pm to midnight, the Society teams up with New York City’s premier promoter of anachronistic parties, Dances of Vice, along with The Art Deco Society of New York to bring you Dances of Vice: Deco Japan and the Heart of the Modern Girl.

The evening opens with an intimate exhibition tour by Japan Society Gallery director Joe Earle, who drops intoxicating tidbits you won’t hear elsewhere about the era’s fashionable flirtation with all things foreign and the concurrent rise of militarism and its bold aesthetic expressions.

From 8:00-9:00 prohibition is lifted with an open sake bar for those inclined to the devil’s drink. Art Deco Society of New York president Kathryn Hausman welcomes guests and the evening kicks off with a Charleston dance lesson, followed by live jazz courtesy of the Kuni Mikami Jazz Quintet featuring vocalist Mari Koga.

Guests roaming the gallery during the event are sure to stumble upon the star of the show, the moga, or modern girl, with her bobbed hair, bright lips and cocktail always close by. Featured in paintings, photographs, prints, sheet music covers, and figurines, the moga was the hip coquette of the era, and she springs to life in a fashion show curated by Mutsumi Gee of Allure Original Styles as the hours wear on.

Tickets are $15 in advance and $20 at the door. Dress to impress in your pre-War finest! The evening is part of Japan Society's Open House Weekend, May 5 & 6, celebrating the Society's inclusion in Partners in Preservation's online restoration grant competition between 40 NYC landmarks. Vote daily through May 21. 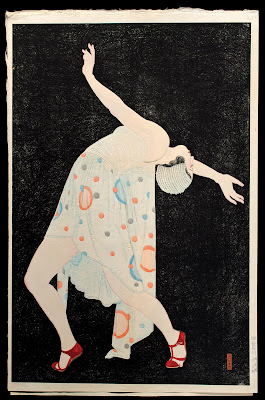