If You're Hungry And You Know It, Eat Japan 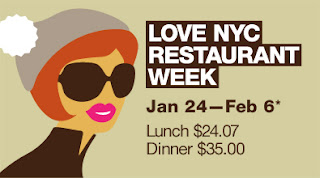 With all of the Sabu craziness this week, we almost forgot that it was Restaurant Week, when dozens of New York City's top restaurant come together to offer diners irresistible meal deals. With a nice Facebook reminder from the trusty New York Japanese Cultural Examiner, it looks like many of the Japanese restaurants taking part were included in our exhaustive breakdown of last year's fête. Here's the full list for 2011, and we advise you to grab a seat while you can. Itadakimasu!


"Jigoku is more than merely a boundary-pummeling classic of the horror genre—it’s as lurid a study of sin without salvation as the silver screen has ever seen," notes Chuck Stephens in his wonderful essay for Criterion.

Regarded as a seminal cinematic depiction of Hell, Nobuo Nakagawa’s Hell (1960), or Jigoku is far less known outside Japan. Serving later as the basis for two remakes, one by Tastumi Kumashiro in 1979 and the other by Teruo Ishii in 1999, Nakagawa’s original was "[b]orn from some unholy union of Goethe’s Faust and Genshin’s Ojoyoshu, a tenth-century Buddhist treatise on the various torments of the lower realms."


Resolutely unafraid of incomprehensibility, Jigoku proves ultimately less an articulation of the moral and postmortal consequences of sin than a free-associative head-on collision of righteously motivated evil intentions and well-intentioned innocents who capriciously lose their souls.

Nakagawa started his film making career in 1924 and made some 90 feature films by the time of his death in 1984. During his tenure at Shintoho, he earned a distinction as the "master of Japanesque horror" in addition to his earlier reputation as "the Japanese Alfred Hitchcock". Hell was the last in a "nine-film string of innovative and deliriously eccentric horror films" made by Nakagawa during the 1950s at Shintoho and given the backdrop of the studio going out of business, the film was subject to budget-saving strategies.

In anticipation of Japan Society's screening of Hell, Steve Dollar at The Wall Street Journal wrote that the movie "sits very near the foundations of the Japanese horror film." He continues:


[Director] Nakagawa's stark and gripping imagery has the punch of a surrealist noir, hypnotizing with poetic visual flourishes before diving into the fiery, forsaken pit of the title—which is realized with an extreme flair for the grotesque and hallucinatory.

The U.K’s Eye for Film comments on the movie's capacity to shatter reality:


Jigoku is a beautiful film. Its play with lighting effects, colour gels and jarring camera angles makes everything - both on earth and below - seem an off-kilter nightmare, while the soundtrack of jazz, wood percussion and theremin only adds to the sense of disorientation. Realism this is not, but Nakagawa is nonetheless concerned with depicting a society that has lost its moral balance, at a time when memories of war-time horror were still fresh in the Japanese mind, while post-war modernisation was engendering its own anxieties about over-permissiveness and the dissipation of traditional values.

A lively lion dance performance in China, families in Japan making trips to Shinto shrines and Buddhist temples, families in Central Asia clamoring pots and pans to drive away evil spirits of the past year, or Persian families creating beautiful altars honoring their ancestors—all provide a glimpse into the rich and festive sights and sounds of New Year’s celebrations in Asia. As countdowns, champagne and cheers reverberate throughout the Western World, many cultures in Asia welcome the New Year calling it by diverse names such as Norouz (Persia), Oshogatsu (Japan), Losar (Himalaya), and Sollal (Korea) with unique and sometimes intriguingly interrelated practices.

Japan Society's Oshogatsu fest takes place in two sessions at 2pm and 3pm. Tickets are $5 for members, $12 for nonmembers, and free for children under ages 2 or under. More at http://www.japansociety.org.

Cuts Like A Knife: The Rock Art of Yoshitomo Nara 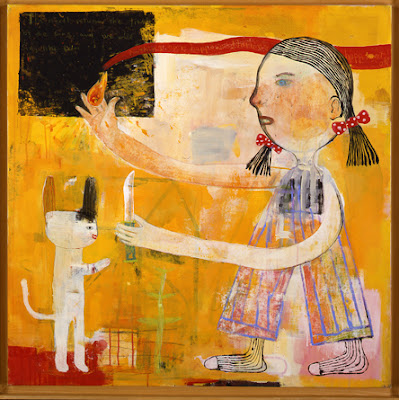 I first came across the work of Yoshitomo Nara at Manhattan's Kinokuniya Bookstore. The thing that stood out for me as I was flipping through a book of his artwork was its simplicity. A raw, color pencil drawing of a child on what appeared to be graph paper, holding a small blade in its hands with the caption “Slash with a Knife!” kick started my fandom from that day forward.

So I was thrilled to visit Asia Society's enormous, all encompassing Nara retrospective entitled Nobody’s Fool featuring his drawings and paintings as well as work in mediums not often associated with him such as ceramics and sculpture -- all exuding Nara’s defining style.

Nara’s paintings typically have no backgrounds, or if there is a background it is on a small scale, thrusting the subject center stage. Often the subject is complimented by edgy, profane (often grammatically incorrect), yet somehow endearing slogans that appear to jump at the viewer.

Nara grew up in Aomori prefecture in northern Japan and speaks about his childhood as a period of isolation (one of the three central themes of the exhibit). It was not uncommon for Nara to come home and find an empty house. He also lived and studied art in Germany for a number of years which was another period of isolation for him. As such, the majority of his work features children or dogs as the main subjects due to his belief that they are the loneliest and most isolated beings in society.

Nara’s other main themes are rebellion and music. His love of 60’s and 70’s rock and punk and 90's grunge is prevalent in his work, with some pictures featuring song lyrics or titles lifted directly from his favorite artists' songs. Unlike the punk movement that inspired him over the years, Nara's idea of rebellion is not political. Rather, he encourages the viewer to follow his/her hopes and dreams even when the larger elements in society would have it otherwise.

Nobody’s Fool closes today, unfortunately, but much of the work and commentary is featured on Asia Society's micro site. You can even get a panoramic view from the middle of his three giant, adorable, somewhat terrifying puppy sculptures without leaving the comfort of your home!

The Asia Society Museum is located at 725 Park Avenue (at 70th Street). Tickets are $10 for general admission, $7 for seniors, $5 for students with ID, and free for members and persons under 16.