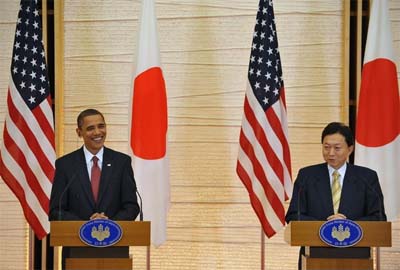 Senior Fellow at the Japan Center for International Exchange, Hitoshi Tanaka, who spoke at Japan Society on January 14th about changes in Japan's foreign policy, recently published an insightful article on East Asia Forum about the state of the relationship between the United States and Japan entitled The US-Japan alliance: beyond Futenma. Here's a brief exerpt:

"The benefits for Japan are clear. The alliance was conceived during the Cold War as a mechanism to protect Japan from a single looming threat—the Soviet Union—that has since disappeared. However, the end of the Cold War has not eliminated Japan’s need for some sort of deterrence capacity. Nearby countries such as China and Russia have nuclear capabilities and North Korea is developing its capability. Japan cannot ignore this."

Also making an appearance on East Asia Forum's lineup was Tobias Harris of MIT, who we featured in an earlier post, with a piece on Okada Katsuya’s first time visiting South Korea as the foreign minister for meetings with President Lee and other senior officials. Here's a quote from his article, entitled Okada acknowledges past wrongs in Seoul:

"Japan has apologized to South Korea before, and many — not only conservatives — will wonder why Japan has to apologize again. Okada’s remarks provide some hint as to why Japan still has work to do on historical reconciliation. Rarely has a Japanese statesman shown that he is apologizing because he has looked at his country’s behavior through the eyes of its victims and come to appreciate just how destructive Japan’s actions were."
Posted by Japan Society at 3:25 PM