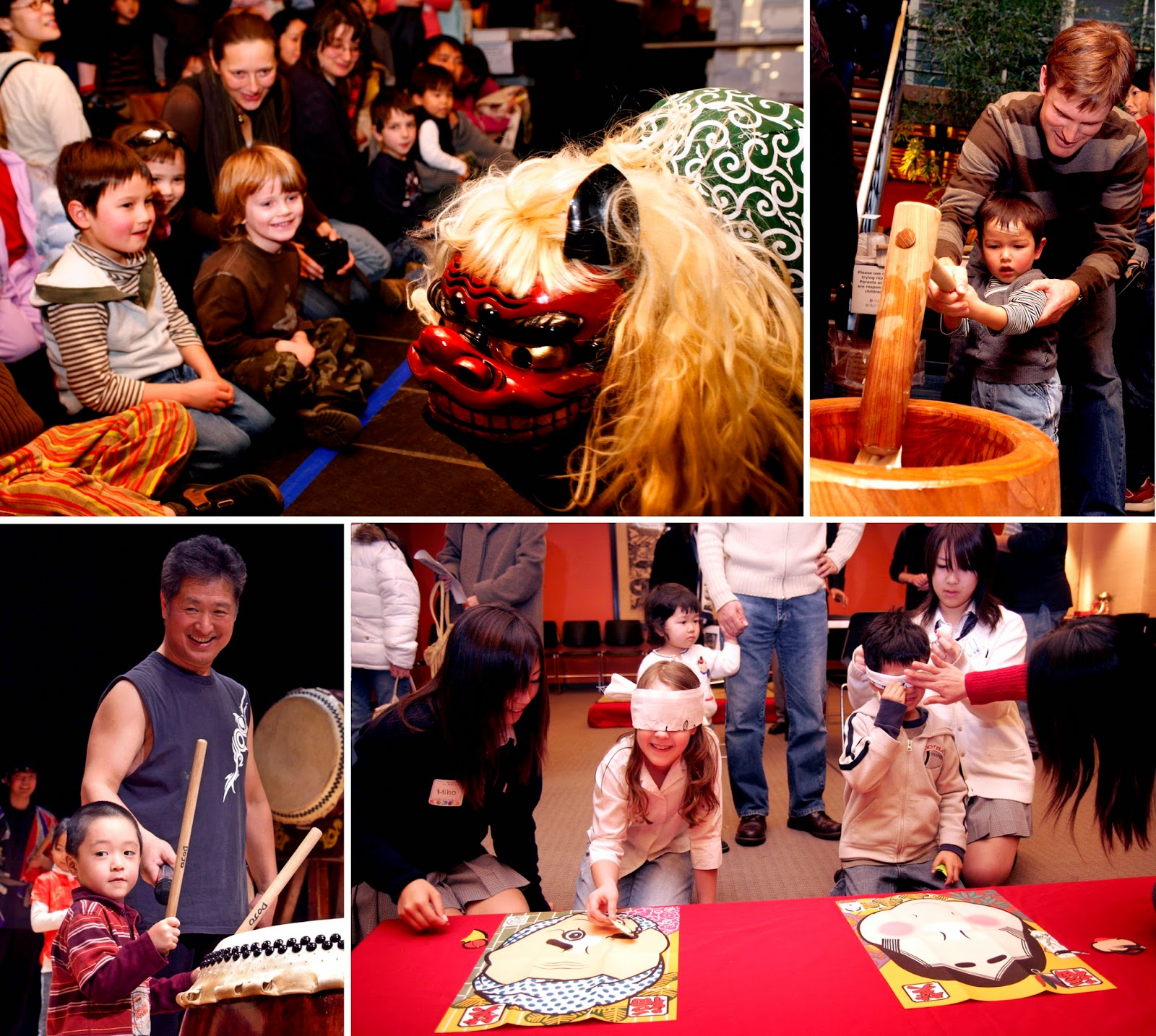 It’s December 31, and the house is spotless, the food has been prepared, and the celebration is about to begin. Tomorrow is New Year’s Day in America, but in Japan, it’s the beginning of Oshogatsu, Japan’s New Year’s equivalent.

"In the U.S., New Year's is just a single day, but the Japanese New Year’s is celebrated for an extended period of time, usually about three days." says Kazuko Minamoto, Deputy Director of education and family programming at Japan Society. "Most businesses in Japan are even closed for the first three days in January in observance of Oshogatsu"

Oshogatsu focuses on starting from a clean slate, so before the new year begins, everyone makes sure all business and housework from the previous year is completed. More like Christmas in America, Oshogatsu is typically spent with family, who often gather at grandparents’ houses for several nights. Great meals are prepared with each item of food symbolizing something.

"As a child, I enjoyed traditional New Year’s food – ozoni (rice cake in soup) and osechi (various special foods we only eat during Oshogatsu)," says Education Program Officer Yumi Nagasawa. "These days my family eats toshikoshi soba noodle, a meal that represents a wish for a long life."

Even the colors of the food's ingredients are taken into account. Lucky colors such as red and white are prominently featured in Oshogatsu dishes, also known as osechi ryori. The cooking takes days of exhausting work to prepare, so it’s not uncommon for modern Japanese people to buy the food pre-made from a high-end kaiseki restaurant.

Education Program Associate Owen Rojek took part in the full celebration for himself recently. "I spent the last two New Year's in Oita, a rural prefecture on the island of Kyushu, with my friend’s family, and it was a great and touching experience. Her immediate and extended family all gathered at her grandfather’s house and it felt like I was attending a large family reunion. Grandparents held great-grandchildren on their knees, siblings reminisced about their childhood, and everyone enjoyed beautifully prepared osechi ryori and copious amounts of alcohol."

While the adults of the house are busy cooking and cleaning, the children are free to play with their cousins that they may not get to see very often. They also receive otoshidama, money from parents and relatives enclosed in a small envelope.

"As a child, of course, my favorite memory is of otoshidama," says Yumi. "Part of the fun was to visit all my relatives, but it was also exciting to find out how much money I received. I learned how to use or save it wisely."

Learning the value of money is a very important part of receiving otoshidama, notes Kazuko. "I was able to save enough otoshidama that I received from my parents and relatives over many years to buy an audio stereo set when I was a teenager. It gave me a sense of accomplishment and taught me the importance of saving money (and patience that goes with it) when I was a kid."

As for the moment the clock strikes twelve, it’s a bit less climactic than it is in America. Rather than meeting up at, say, Times Square to watch the ball drop, families will head to nearby shrines to pray for success in the new year.

"As the end of the year drew closer, there was no big countdown like in the U.S.," says Owen, "but we all put on our coats and shoes and went to three local shrines to celebrate the New Year in an activity known as sansyamairi. We prayed for a good year and bought slips of paper with our fortunes for the New Year. This last time, I got daikiti, which means 'best luck' and is the best fortune you can get. After returning home, we went to sleep because we would be going to see the first sunrise of the year, another New Year’s tradition in Japan. After watching the sunrise from a nearby mountain, we returned home and ate ozoni, the traditional New Year’s day soup containing rice cakes and vegetables. Dinner was leftover osechi ryori, which was still delicious."

"We enjoyed hearing the sounds of year-end bell, Joya no kane – 108 times, says Yumi. "This is to cleanse the 108 kinds of human egos before welcoming a new year. My family lived close to a famous shrine, and we often went to give prayer on the first day (or very early morning around Midnight) to start the New Year with a good wish and a good new year’s resolution.

Many Oshogatsu traditions have endured through the ages, and several are on display for children to discover and participate in at Japan Society’s annual Oshogatsu Family Festival this Sunday.

Guests can watch taiko drumming, lion dancing, pound their own mochi, write calligraphy, and participate in other fun events.

Having been a part of Japan Society's Oshogatsu event since its inception, Kazuko shared an element of volunteerism that few people may realize occurs:

"One of the most memorable and consistent scenes I have witnessed since we started Oshogatsu is how over fifty high-school student volunteers, including Japanese teens from Keio Academy and American teens from one-to-two local high schools who study the Japanese, work closely together to help children at the game and activity booths. Those students were hardworking, diligent, kind, and thoughtful to our younger guests and our presenters and performers. Keio Academy students looked very proud of their country’s tradition while American students truly enjoyed the festival atmosphere they couldn’t normally experience in their classroom setting. We are grateful for their assistance."

It’s an atmosphere unique to Japan, which makes the event such a unique opportunity for those who wouldn’t otherwise be able to experience it.

"I am still fairly new to Oshogatsu at Japan Society, having only experienced it last year," says Yumi, "but it is a wonderful opportunity especially for young children to experience a Japanese custom and tradition in a fun way. Traditions are acquired through experience, so Oshogatsu is a chance to experience and learn about Japan without being in Japan, and for family to create and share memories."

Photo by George Hirose.
Posted by Poguego at 10:58 AM

Yeah Japan's New Year eve events are always awesome. I have attended lots of other events too. All the Japan events are enjoyable. Hey guys, have you ever been to New Year eve NY events ? If not I highly recommend visiting there at least once in your life! They are outstanding!!

Hey, It is a nice way of Japanese lessons.
Thanks for sharing , I appreciate your efforts.
Learn Japanese online

Professional trading signals delivered to your mobile phone every day.

Follow our signals NOW and gain up to 270% daily.

I'm a long-serving digital marketing professional and full-service as a social media marketing manager. I'm offering services at a competitively low cost. I have experience in keyword research, Article writing or Rewriting, Guest posting, B2B Lead Generation , Data Entry ,link building, web 2.0 backlink ,
. I have 5 years of experience in the field and are assured of delivering High Quality and manual work. I have my own site name as AbidhTech. My Blog site also here. This is a Bangla deshi Science club site .

Hi there, I enjoy reading all of your post. I wanted to write a little comment to support you.

This web site truly has all the info I wanted about this subject and didn't know who to ask.

Stunning site! Do you have any accommodating clues for trying essayists? I’m wanting to begin my own site soon yet I’m somewhat lost on everything. Would you prompt beginning with a free stage like or someone write my assignment go for a paid alternative? There are such a large number of alternatives out there that I’m totally overpowered .. Any thoughts? Welcome it!

An impressive share, I just now with all this onto a colleague who was conducting a little analysis during this.
고스톱

I love this blog! your happiness that remains constant even if you are ill. what i always said do not lose stamina. your positivity is your strength that can fight your disease. you have to struggle with this condition for your entire life with your family.
스포츠토토

I have gone through this article named ' Walk My World Learning Event'. It was a very informative article. The main feature of this article is the way of writing so that we can easily follow the information.
일본야동

I don't know what to say after reading this article. Anyway, hope for the best. Everything will be alright one day. Don't lose your hope. There will be a day you can do everything. I will pray for you. May God bless you.
토토사이트

If we are going to talk about murals, it is a harsh reality that there are people who do not appreciate artworks like this. I fell bad, but there is less that I can do; I want them to realize that murals are beautiful and worth appreciating. But I simply don't know where to start. Sometimes, assignment writing help I think of writing as my way to influence people to appraiser things that should be appreciated. I don't know if that is going to be effective, but I want to give it a try.