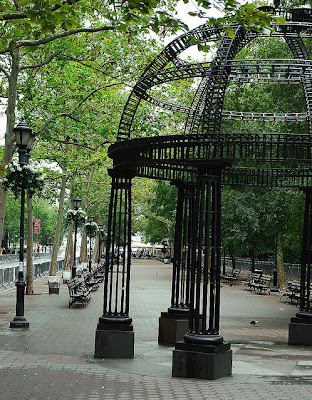 Across from Japan Society is the cozy, tree-lined, avenue-length Dag Hammarskjold Plaza, a Midtown park where weary business folk, diplomats from all nations, and curious visitors find rest. Known as the "Gateway to the United Nations", the plaza is an oasis in the Turtle Bay neighborhood.

A steel gazebo at the Second Avenue entrance opens onto a brick promenade lined by light fixtures that take after old-fashioned gas lamps and benches modeled after those made for the 1939 World's Fair. Several fountains surround the plaza imbuing calm, while public sculptures and memorials stand in fascinating contrast to the urban, monochromatic surroundings.

One historically charged piece is Good Defeats Evil by Zurab Tsereteli, which is a sculpture of Saint George Slaying the Dragon comprised of parts from Soviet and American ballistic missiles.

Further in, one can stroll through the Katherine Hepburn Garden where the late movie great’s image and memorable quotes decorate stepping stones that form a path through seasonal flowers and vegetation.

For those who don’t speak Swedish, learning to correctly pronounce the plaza's name is easier than it looks. It comes from the plaza’s esteemed honoree and namesake, Nobel Peace prize recipient Dag Hjalmar Agne Carl Hammarskjöld, who served as the Secretary-General of the United Nations throughout most of the 50s and traveled all over the world for missions to end disputes and work towards world peace. Tragically, a plane crash while on the way to oversee the United Nations Force he established in Congo took his life 50 years ago this month. The city has preserved his legacy through the beautiful Dag Hammarskjold Plaza.

While most visitors to the plaza come to find peace from hectic everyday life, many come during the course of a year to fight for peace in their own country. Given the proximity to the United Nations and various consulates, public demonstrations are a regular occurrence. As a man who vigilantly aimed to progress world peace, Hammarskjold would have it no other way than to have the people of all nations freely speak their minds.

In addition, designated areas allow for a variety of performances and community events throughout the year, there is a constant rotation of public art, and every Wednesday fresh foods are available at a farmer's market beginning at 8:00 am.

Whether attending a film screening, performance, exhibit, discussion, or language class, Dag Hammarskjold Plaza is a memorable stop whenever you make Japan Society a destination. 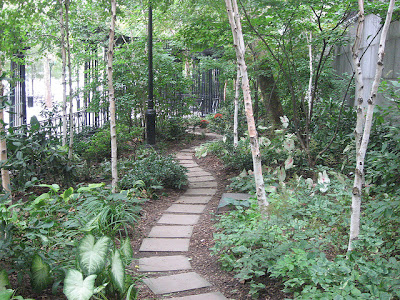 Top photo by Sean Tomizawa; bottom photo by This Week in New York.
Posted by Japan Society at 7:18 PM