Delight in the Details: A Closer Look at Japan Society's ‘Garden'


Whether diabolical or divine, details in art capture (and sometimes overwhelm) the imagination, and can transform a single instant into an hours-long adventure of discovery.

A prime example of this is early Netherlandish painter Hieronymus Bosch's masterpiece Garden of Earthly Delights. According to Taschen’s recently released Hieronymus Bosch: Complete Works, the piece is "populated with grotesque scenes of fantastical creatures succumbing to all manner of human desire, fantasy, and angst… alongside traditional hybrids of man and beast, such as centaurs, and mythological creatures such as unicorns, devils, dragons, and griffins, we also encounter countless mixed creatures freely invented by the artist."


Bosch's thematic complexity, compositional density and artistic playfulness inspired the title of Japan Society Gallery's current exhibition Garden of Unearthly Delights, which showcases three Japanese masters of their craft, or takumi: Manabu Ikeda, Hisashi Tenmyouya, and the collective teamLab, all of whom are creating what the New York Times calls "Japanese art 2.0."

In the artists' works, "the past, the present, and the future collide creating hallucinatory visions like The Garden of Earthly Delights," writes Director of Japan Society Gallery and exhibition co-curator Miwako Tezuka in the catalogue. "Just as Bosch did, the three Japanese artists allegorically depict urgent cultural and social issues in a manner informed by their contemporary environment—in their case, today’s world of spectacle an information overload."

Spectacle indeed. Though only showing 25 works, Garden of Unearthly Delights encompasses a vast treasure trove of stimulating and subtle wonder, the antithesis to the blaring lights of Times Square or the constant bombardment of advertising from our TVs, mobile devices and almost every surface we encounter on our commutes and travels.

In honor of the Garden of Unearthly Delights closing today, here are some surprising, thoughtful and/or humorous details visitors may have missed. 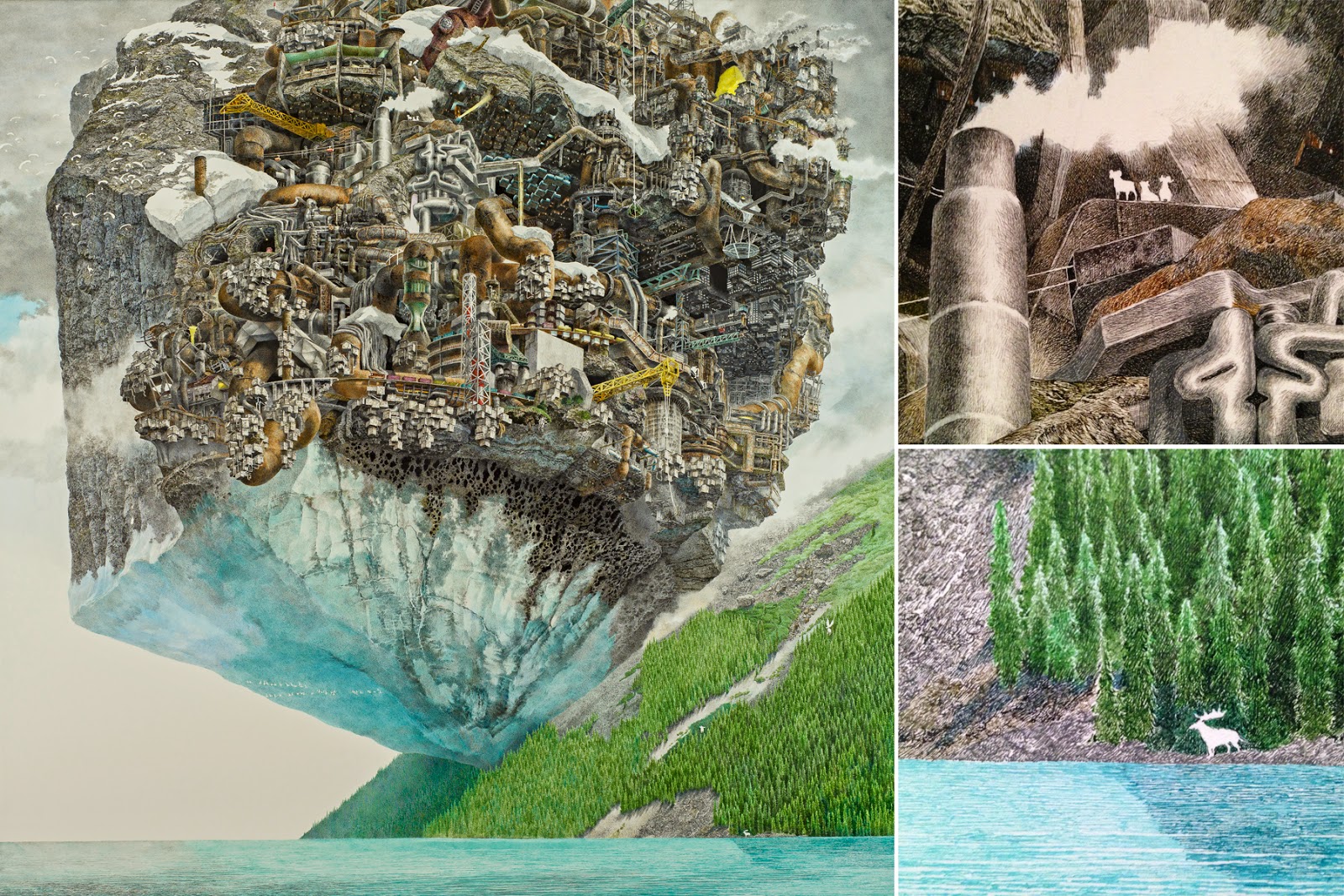 Manabu Ikeda is known for the painstaking detail of his work, which often takes more than a year to complete.The exhibition's other co-curator Laura J. Mueller writes, "Ikeda, through the medium of his meticulously executed pen-and-ink drawings, creates dreamlike worlds on his canvas that visually explicate some of the major dilemmas that we face today--such as climate chaos and the resulting natural disasters--questioning mankind's role in both causation and correction."

Meltdown, pictured above, was created in response to Japan's 3/11 earthquake and tsunami. The waste spewing, ice-encrusted industrial plant hovering over an idyllic landscape is a stark commentary of mankind's impact on nature and the potential (or actuality) of cataclysm. To further heighten the tension, pure white silhouettes (a common motif throughout Ikeda's work) of animals appear in and out of their natural habitat, oblivious to the looming man-made disaster.

A giant snake rising in the mist and toadstools buried in the trees dominate Ikeda's Mountain and Clouds, but take a magnifying glass to the bottom right corner to find apparitions haunting the trees. Are these kodama, tree spirits from Japanese folklore, or is this an homage to Japan's tragic Aokigahara forest at the base of Mt. Fuji, also known as "Suicide Forest"?

Visitors entranced by the electric waves of Ikeda's impressionistic and relatively straightforward Imprint may have missed a barely visible torii, the iconic gateways to Japan's Shinto shrines, submerged in the darkest blue of the center stillness.

A tiny bee and spider hitch a ride on the back of Ikeda's vegetative Grass Mantis.

Some visitors have said they spent hours scouring every inch of Ikeda's breathtaking 780 square foot Foretoken, pictured in full at the top of this article. In this work Ikeda cleverly reverses the kineticism (and perhaps symbolism) of Hokusai's famous The Great Wave at Kanagawa, an obvious source of inspiration. Hokusai's titular wave not only threatens three fishing boats with its awesome, all-consuming momentum, but dwarves the static and typically dominating Mt. Fuji in the background. In Ikeda's work, Mt. Fuji is nowhere to be seen, and the wave, literally frozen in time, is brimming with life, from birth to playful specters of death, as seen in the details above, as well as countless scenes of humorous, imaginative invention.

In not one but two places, skeletons enjoy the aftermath of a plane crash. Note the silhouetted vultures in the second detail enjoying the show.

Homages to icons of Japanese mythology abound like like this dragon and fisherman landing a giant koi (carp) using koinobori as bait. 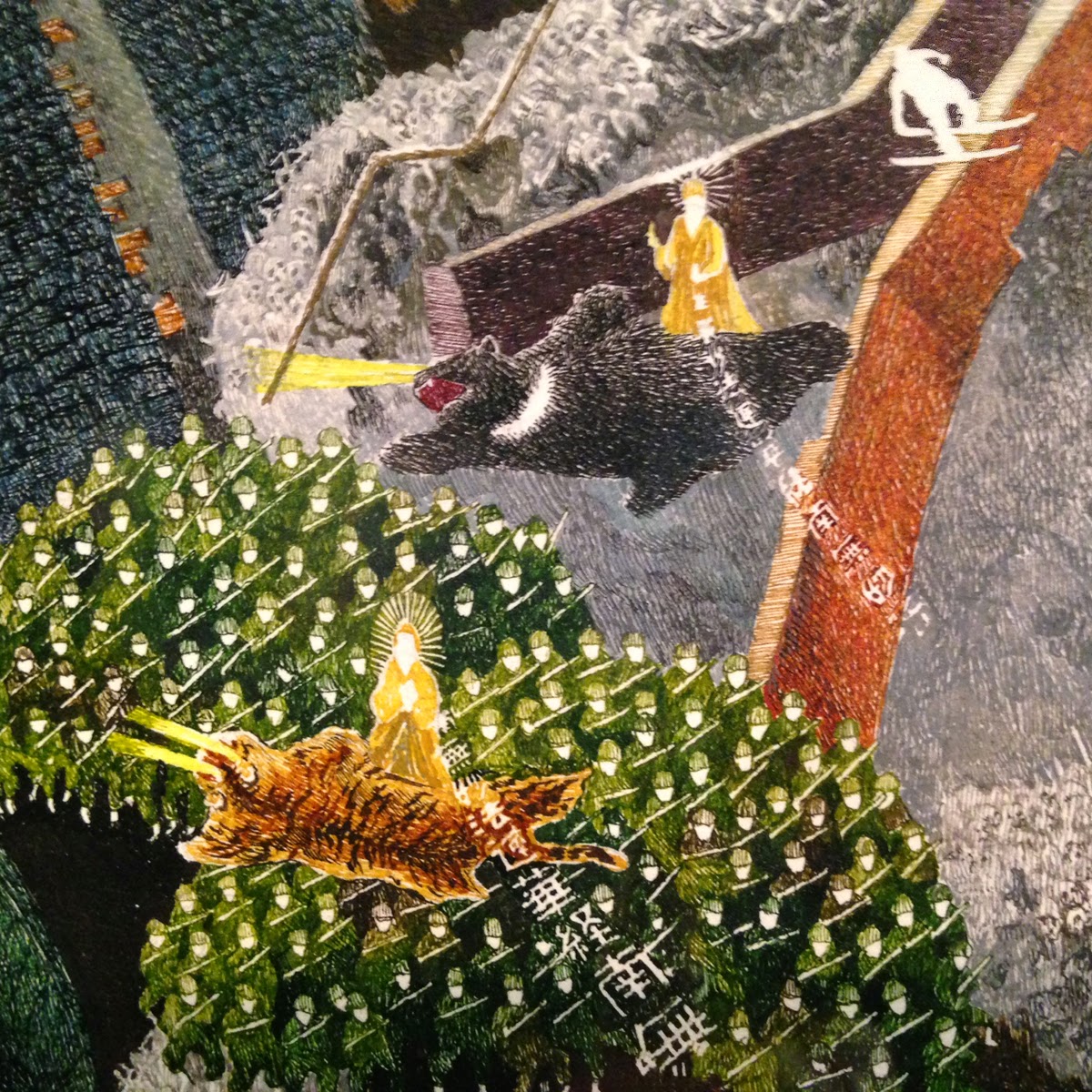 And finally (but by no means completely) in terms of Ikeda's detail, Tezuka explains the ubiquitous hovering spirits, above, and their poignant meaning for the artist: "The deity riding the flying animal is chanting a Buddhist sutra, in this case 'Namo Amitābhāya' (in Japanese, 南無阿弥陀仏 or Namu Amida Butsu), literally meaning 'Homage to Infinite Light.' There are several such figures in Foretoken, and Ikeda has said that at least one of them was his grandmother when she passed away." 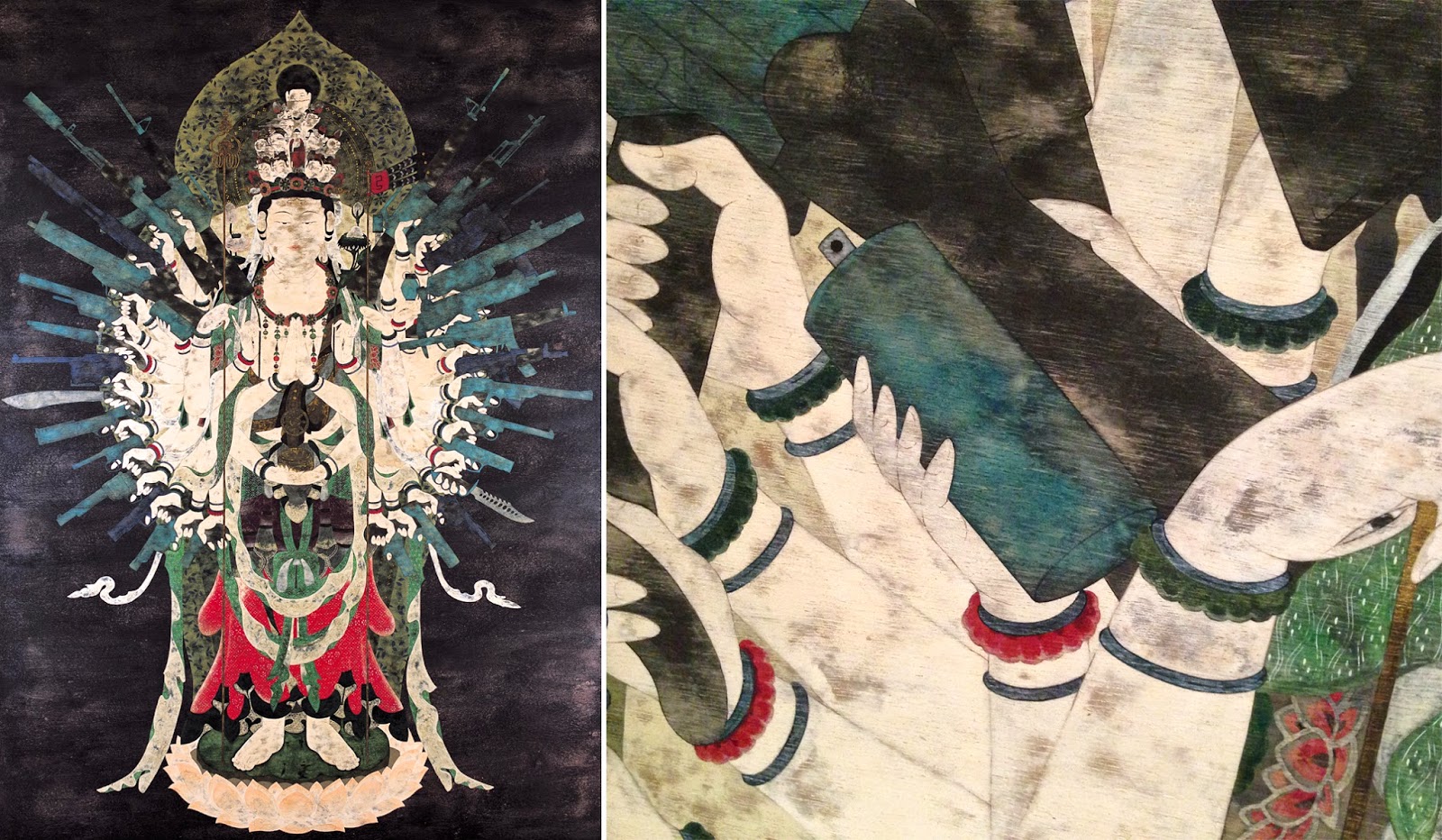 Hisashi Tenmyouya "appropriates imagery and creative techniques from traditional Japanese art, reinterpreting them in a shockingly contemporary manner with references to subjects such as modern warfare and street violence," writes Mueller. "Taking cues from Buddhist themes and imagery, Tenmyouya imbues his art (whether intentionally or subconsciously) with meditative and religious meaning."

Tenmyouya’s iconoclastic Neo Thousand Armed Kannon, above, painted shortly after the 9/11 terrorist attacks in the U.S., shows the beloved Buddhist goddess of mercy with her arms splayed behind her, each hand holding a menacing and militaristic gun or knife. Some have seen this piece as purely sacrilegious. But upon closer inspection, two hands at her chest hold something different, almost as an offering: a grenade in her left, and a can of spray paint in her right. Does this represent a possibility for art amidst overwhelming threat of violence? Does it symbolize an imbalance between destructive and creative forces in our world? Is it implying that art is dangerous—for the artist, for the viewer, for the establishment?

Much has been written about the "anti-Zen" garden in Tenmyouya's installation Rhyme, especially how there is no blood spilled in the epic mirrored battle scenes on the wall. The blood, however, has pooled amongst the skull-embossed rocks below, in the form of crimson sand, which was carefully, almost meditatively raked by the artist days before the exhibition opened. Is this anti-Zen? Or has the artist found an ultra-Zen method to process violence in art and life?

Another detail that may have been overlooked: only one of the dozens and dozens of yakuza-like warriors in the painting has eyes, and, to eerie effect, they are the same shimming goldleaf color of the background. 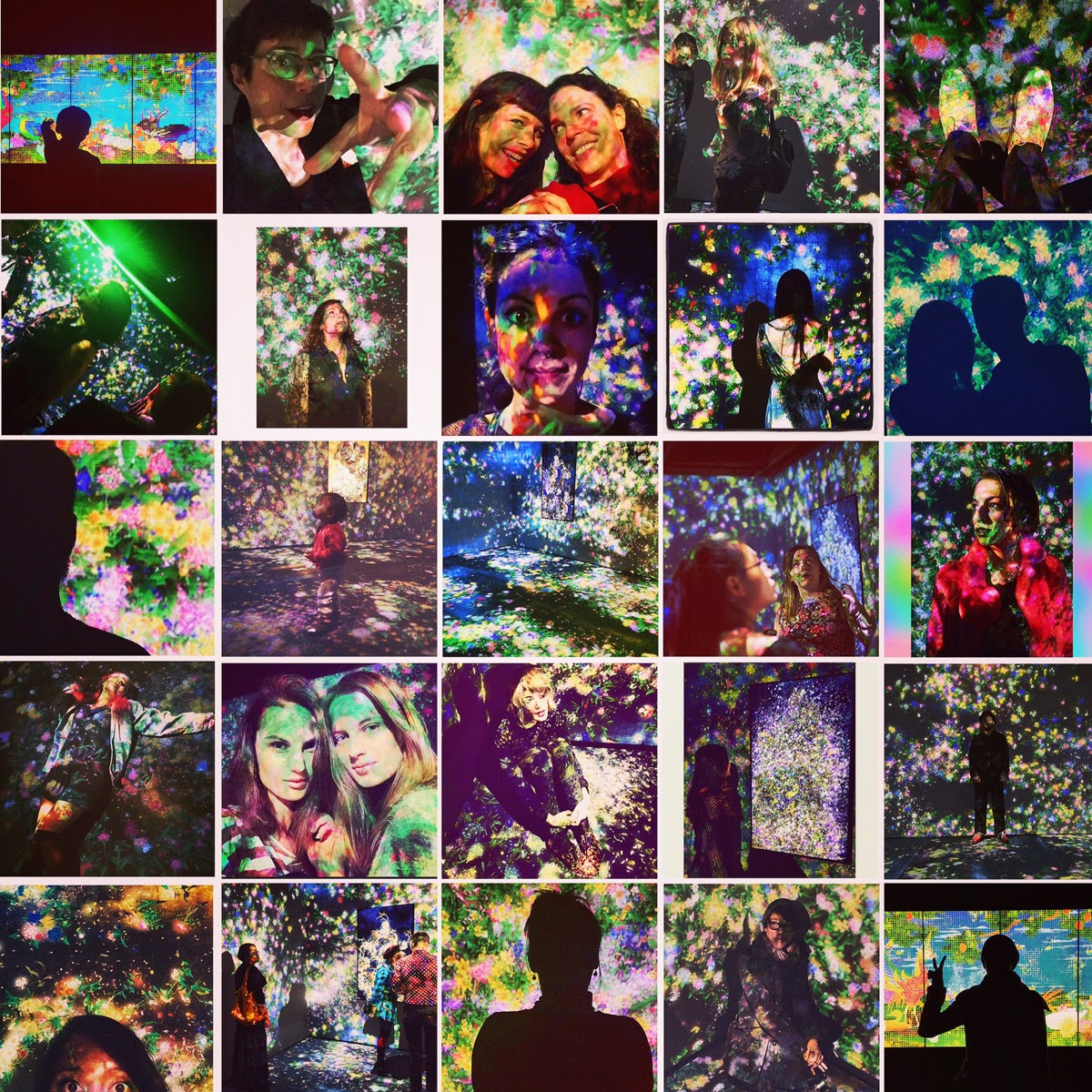 Finally, the most important detail of the exhibition: all of the people who came to Japan Society Gallery to explore and enjoy Garden of Unearthly Delights. Above are 25 of the hundreds of Instagram selfies taken by people in teamLab's immersive and interactive Flowers and People installation created exclusively for the exhibition.

The show may be over, but enjoy it one last time (or in perpetuity) with this video walkthrough brought to you by Japan Society Gallery.

I need to thank you for this very good read and i have bookmarked to check out new things from your post. 룰렛

This article has great information for everyone. This is a very interesting article on the topic generate fake screenshot, and I'm excited to share it with you. You can use this article to create fake social media posts and share screenshots for fun.

Thank you for the auspicious writeup. It in fact was a amusement account it. Look advanced to more added agreeable from you! 한국야동

Also do visit may web page check this link 야설

Hey very cool site!! Man .. Beautiful .. Amazing .. I will bookmark your blog and take the feeds also…I’m happy to find numerous useful information here in the post, we need work out more techniques in this regard, thanks for sharing. 한국야동

Also do visit may web page check this link 야설

I’m impressed, I must say. Rarely do I come across a blog that’s both equally educative and interesting, and let me tell you, you’ve hit the nail on the head 야동

Also do visit may web page check this link 국산야동

I’m truly enjoying the design and layout of your website. It’s a very easy on the eyes which makes it much more enjoyable for me to come here and visit more often. 국산야동

Also do visit may web page check this link 한국야동

I read this article fully regarding the resemblance of most recent and preceding technologies, it’s amazing article. 한국야동

Also do visit may web page check this link 야동

Your means of telling the whole thing in this piece of writing is truly nice, all be capable of easily understand it, Thanks a lot. 토토사이트

For latest information you have to pay a quick visit world-wide-web and on the web:
I found this site as a most excellent web page for newest updates. Thank you fellas!
Introducing Toto's proven safe + useful sports Toto betting information! If you want to enjoy watching sports To the world of [SportToto 365] 파워볼사이트

Nice post. I was checking constantly this blog and I am impressed!
Very useful info specially the last part :) I care for such information much. I was looking for this particular information for a long time. Please follow the given link below and browse on my website: 바카라사이트

Thank you and best of luck!!!

Your writing is perfect and complete. 크레이지슬롯 However, I think it will be more wonderful if your post includes additional topics that I am thinking of. I have a lot of posts on my site similar to your topic. Would you like to visit once?