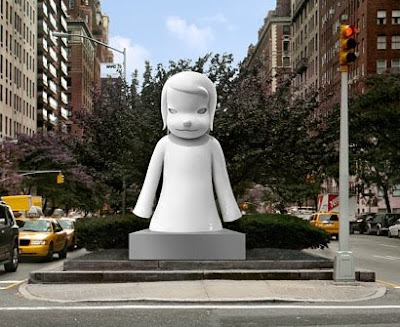 Yoshitomo Nara to park it on Park Ave. Image via.
Disappointing Election Results for PM Kan

Even though Japan’s new PM, Naoto Kan, was appointed during a trick time in his country’s political history, he enjoyed an early surge in popularity and good will. This popularity proved to be short-live. In the recent elections, the Upper House, once dominated by Kan’s DPJ, underwent an extensive reshuffle, attributed by analysts to Kan’s position to raise the consumption tax.

On the other hand, the changing dynamics of the Upper House benefited smaller, newer political parties like Your Party (Minna no Tou), which came out of it with a healthy-sized minority. Yoshimi Watanabe, leader of Your Party, called for Kan to dissolve Parliament and step down because he foresees an unstable future. Many within the DPJ as well are calling for Kan’s resignation, reflecting the results of the election. To a certain extent, it’s common for Japanese politicians to resign following disappointing results—one of the reasons there have been five prime ministers in four years. However, Renho, minister of government reform asked, "Is there anything to be gained by resignations?" Her words have sunk in with DPJ members, and while many officials holding office in the cabinet lost their Upper House seats, Kan is calling on them for unity, promising a comeback in the polls.

The Japanese International Corporation Training Organization has come under fire recently for allegedly exploiting foreign interns. This governmental organization makes positions for foreign interns, usually from developing countries, to work in technological or industrial companies and practice Japanese. Over 200,000 interns are in Japan under this program, and last year 27 died from symptoms related to overwork: heart failure, brain disease, suicide, and road accidents. While this figure is down from 35 in 2008, it still raises big concerns for workers' rights. Many interns reported working 100 hours of overtime on top of the 350 per month they were contractually obligated to. A group of lawyers and human rights activists representing the interns is seeking compensation for families of the deceased in Japanese courts.

CNNGo has a fascinating article on the culture surrounding Japan's internet and manga cafés, which have evolved from rows of monitors with swivel-chairs into warrens of small capsules equipped with reclining chairs, cutting-edge entertainment consoles, and on-demand fast food. Typical prices are about ¥300 an hour (around $4) or ¥1500 per night (about $17), making them a cheap hotel or shelter substitute. Many homeless as well migrate between internet and manga cafés because they are cheap, comfortable, and climate-controlled. Free shower facilities are available too. Of course, this phenomenon has a name coined by the Japanese press: Net Café Refugees.

►902 unexploded bombs that date from WWII were discovered beneath an Okinawa restaurant. The bombs, manufactured in America, were not considered to be in danger of exploding and were safely disposed of by the Japanese Bomb-Disposal Squad.

►Torrential rains have plagued the Western regions of Japan this summer, with tragedy in Hiroshima Prefecture this week.

►From The Japan Times: pundits posit a cloud over U.S.-Japan ties, two Americans head to Japan to document A-bomb survivors,  and next fiscal year all Japanese 5th and 6th graders will be taught English.

►The New York Times reports "cutesy yet devilish cartoon characters created by the Japanese neo-Pop artist Yoshitomo Nara will soon be familiar sights on the Upper East Side landscape."

►Japanese beer to blast in the U.S.

►Photos from the Tokyo Toy Show.

►Save a bird: adopt a wild cat.

►Bugged wondering who owns the Sony television on the Beatles' Sgt. Pepper's Lonely Hearts Club Band album cover?  This will guarantee to raise a smile!

eToro is the ultimate forex trading platform for rookie and advanced traders.