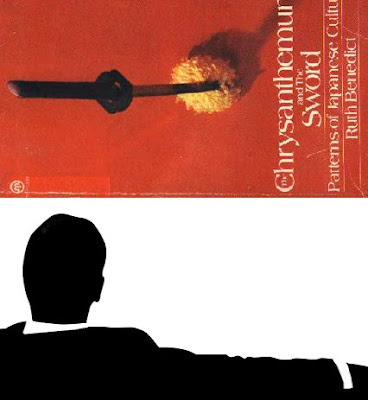 A colleague informed me that our friends at Asia Society got the "Mad Men" bump this week (so jealous!) in an episode in which the protagonist advertising firm woos a Japanese client. (Full disclosure: I don't watch the show, because really, it's the story of my life, but there's a surprising amount of recaps out there, from mainstream distilling at Entertainment Weekly and Huffington Post to The Awl's veritable meltdown.)

As The New York Times recalls, "Every stereotype of Japanese corporate culture is hammed up here — the ritualized greetings, the essential exchange of gifts, the general obsession with protocol." To prepare for their conquest, the "Mad Men" office reads Ruth Benedict's The Chrysanthemum and the Sword, and decides it's best to shame the competition to win the account. Continues The Times: "Shame as a kind of cultural practice is discussed at length in Benedict’s book and the theme of shame runs through the entire episode."

Since its 1946 publication, Benedict's Chrysanthemum is considered either a seminal and influential work of Japan Studies, or a notoriously contrived exercise in pseudo anthropology. According to the average Amazon reader's review, it is deemed a modern classic. The academic reaction is just as varied: it's a clash of civilizations experience, "an example of the politicization of anthropology", a museum piece, and/or merely one more book to read preparing for Japan fieldwork.

Chrysanthemum was based on a study commissioned by the U.S. during World War II to understand the "Japanese enemy." Because of constraints, Benedict did not conduct the appropriate fieldwork and based her report entitled "Japanese Behavior Patterns" on translated novels, movies, propaganda, and interviews with Japanese-Americans in U.S. interment camps. Expanded after the war, the resulting book was popular in the U.S. and, once translated, in Japan as well.

One fan was C. Douglas Lummis. When planning a move to Japan in the early 60s (the same time period as "Mad Men"), he picked up the book and was "corrupted by the myth":


"I walked around Japan like a miniature Benedict, seeing 'patterns' everywhere, and thinking it was wonderfully clever to be able to 'analyze' the behavior of the people around me, including even invitations to dialogue and expressions of friendship … [this attitude was] rampant within the community of Westerners in Japan, and especially among the Americans, so many of whom saw themselves not only as miniature Benedicts, but also as miniature MacArthurs. After some time I realized that I would never be able to live in a decent relationship with the people of that country unless I could drive this book, and its politely arrogant world view, out of my head."

Taking his cues from some of the negative reactions in Japan to the "deeply flawed" book, he penned his sprawling, fascinating, titularly telling essay "Ruth Benedict's Obituary for Japanese Culture" (recently updated). The essay is as much a must-read as Chrysanthemum or any focused critique of contemporary Japanese culture. Of course, context and purpose of the work is an important factor when reading for the complexity of U.S.-Japan relations.

Which leads me to wonder: was the use of Chrysanthemum part of the "Mad Men" writers' punch line in their comedy of cultural errors? One would assume so since the episode takes place shortly after the 65th anniversary of the atomic bombings of Japan and the end of WWII. I'm also curious how many people rushed out to buy the book after watching the episode. At the time of writing, it's fluctuating dramatically in Amazon's top 20 History/Asia/Japan bestsellers.

Which leads me to wonder: was the use of Chrysanthemum part of the "Mad Men" writers' punch line in their comedy of cultural errors?

Yes. The minute Peter came in and told everyone to read Chrysanthemeum, I cringed and then laughed. I think the hyper-ritualized way in which the team at Sterling Cooper Draper Price acted was the perfect example of how horrible but significant that book was for Americans interested in Japan or doing business with Japan.

I think we take for granted now that people who deal with international business are simultaneously trying to accommodate the culture of the other party: brushing up on handshakes and bows, for example. But the point I think the episode was trying to make was how different those interactions were when Japan was considered to be insurmountably foreign and how Benedict's book put essentialized stereotypes of Japanese culture on the map for years to follow. (Those of us in Japan Studies are still trying to undo the damage all these years later.)